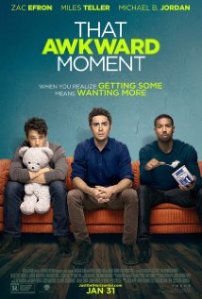 If there has ever been a movie to deter me from ever wanting to date in New York City again, this was that movie.

Now listen, I may pride myself on having an unhealthy obsession with chick flicks but I also LOVE myself some guy humor. I mean, I may or may not have spent my Valentine’s Day night sitting on the couch with my two roommates watching fart videos on YouTube like this one:

(Note: our V-Day wasn’t completely void of any class. Prior to this we smuggled some Two-Buck Chuck into a movie theater and saw Her for the 3rd time. Review to come.)

Anyway, my point is that normally I can overlook the copious amount of sexism that is prevalent in most “guy humor” flicks, IF they are indeed funny and original and all of that other stuff that makes a movie enjoyable. But the most awkward moment in That Awkward Moment was five minutes in when I realized I had already cringed at two flat jokes about how easy-yet-needy females are and still had a full hour and 29 minutes to suffer through.

The film opens up with some VO by Zac Efron telling us about this dreaded thing he calls “The So Moment” which occurs after roughly six weeks of fucking a girl where she asks (while his dick is inside her, obvs), “So… where is this going?” because, I mean, girls can just never have casual sex and ALWAYS have to let emotions get involved and just want to be in a relationship with anyone who will be in a relationship with us. Right?! After this, we meet Mikey (Michael B. Jordan) whose wife is cheating on him with some guy “who looks like Morris Chestnut” (and is played by Morris Chestnut, which actually did make me laugh). He tells his besties Jason (Efron) and Daniel (Miles Teller) about it, and they all decide YEAH! THIS IS GREAT! WE CAN ALL BE SINGLE GUYS WHO BANG LOTS OF CHICKS AND PLAY XBOX IN OUR BOXERS WHILE DRINKING WHISKEY TOGETHER! POUND IT.

Except then Jason meets Ellie (Imogen Poots) who is perfect because she is blonde, and witty, and well-read, and forgives him when he misunderstands what she meant by “dressing up” for her birthday and shows up wearing a dildo (which is not only a total Legally Blonde rip-off but also an inappropriate costume choice for anyone not in a fraternity even if this WAS a costume party). Also, she’s really good at Xbox and drinks Scotch. And did I mention she’s cool with the fact that he thought she was a hooker when they first met? Meanwhile, Daniel starts hooking up with his super down-to-earth gal pal Chelsea (Mackenzie Davis), and Mikey and his wife give their marriage another go. But of course, the friends aren’t honest with one another about their relationships. Because they made a pact. And bro pacts are ALWAYS more important than the feelings of a female. So they all downplay it, to the point where Jason stands up Ellie AT HER OWN DAD’S FUCKING FUNERAL because that would make him look weak to the guys. God forbid!

Spoiler alert: Ellie forgives him at the end. Of course.

Anyway, this film – written and directed by Tom Gormican – was just one bad joke after another. It was literally like his formula for writing this script was sexist cliche + trying-to-be-edgy pop culture ref, followed by lame joke, repeat. As you know, I am a big Zac Efron fan for more than just his looks and I defended his acting in my review for The Lucky One. I stand by that opinion here, and I also feel the same about Michael B. Jordan (whose Fruitvale Station performance moved me beyond belief) and Miles Teller, who I haven’t seen much of but like his comedic timing. Why any of them would agree to this movie though is beyond me. Maybe they thought they’d find the comedic success that Bradley Cooper, Ed Helms, and Zach Galifianakis did after The Hangover, or like the whole Apatow crowd did after Superbad, but sorry guys – the material just WAS NOT there.

As they say, don’t hate the players, hate the game. Well, I REALLY hated this game.